Cookies help us deliver our services. By using our services, you agree to our use of cookies. Learn more
Solent University (Southampton)

A minimum of 2 A Levels required.

Accepted when studied alongside other Level 3 qualifications

Pass in Access course with 60 credits overall including 45 Level 3 credits passed with a minimum of Merit.

From a minimum of 2 A Levels or equivalent qualifications such as BTEC Extended Diploma or OCR Extended Diploma. For detailed information on accepted qualifications, please view our Course Entry Statement (https://www.solent.ac.uk/how-to-apply/documents/course-entry-requirement-statement.pdf) Solent University is a proud champion of widening participation. For further information about our contextual offer, please visit our website (https://www.solent.ac.uk/how-to-apply/what-next/contextual-offers).

With a wide range of high-end film equipment, a passionate teaching team and a reputation for producing well-rounded graduates, film production at Solent University will help prepare you for life as a film production professional.

The making of a film is a very complex art form requiring a variety of skills and expertise including creativity, passion, commitment, technical expertise, team working, vision, and research skills. This degree gives you the opportunities to develop these specialist skills through a creative, practical yet academic curriculum built on real-world film production practices.

You will be supported to develop a range of filmmaking knowledge across key roles including writing, directing, cinematography, sound, editing and producing, whilst also having the chance to specialise in some of the key creative roles involved in the making of films. You will also have the opportunity to produce many short films and a final year graduation film, all designed to put your knowledge into practice.

Your core knowledge will also be complemented by modules in Film Marketing and Fundraising, which will help you to learn how to raise money for your films and distribute them to festivals and beyond.

This degree will equip you with the core skills and knowledge to be a better filmmaker, to understand cinema critically and creatively, and to be challenged and grow as an individual.

There will be opportunities to gain industry standard accreditations on platforms like Pro Tools, Avid and more.

**What does this course lead to?**
Our recent graduates have gone into a variety of exciting roles with major industry players such as Warner Brothers and Endemol, and have worked in various roles on big blockbusters – some have also gone into formatting of TV shows such as Big Brother. Other graduates have gone on to form their own independent production companies and produce all kinds of films from commercials, documentaries to indie-shorts and features.

Some students finish the degree and decide that a career in film isn’t for them, however thanks to the key transferable skills that are embedded throughout, these students are able to explore a career in areas as diverse as; arts management, business, teaching, marketing, graphics, VFX and music production.

**Who is this course for?**
BA (Hons) Film Production is ideally suited to students who have a flair and passion for telling stories with images, enjoy challenges, and who want to learn how to make better cinematic films.

£18,000
med
Average annual salary
95%
med
Employed or in further education
80%
high
Employed in a role where degree was essential or beneficial 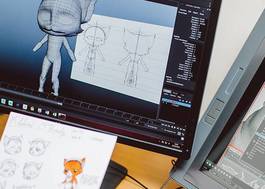