The reality of Clearing: as told by students

Don't let your perception of Clearing be shaped by what you read in the newspaper. Here’s the real story from people who have actually gone through the process…

What is Clearing? Read our survival guide or browse our special advice section.

OK, sometimes it's a nightmare

By its very nature, Clearing can be a really stressful time - but soldier through, and you might come up smelling of roses in the end.

Clearing is quite frankly a horrible process. Having achieved AAAB at A levels, my position was very fortunate when accessing clearing. However, it seems to be on the receiving end that most of the problems occur.

The universities are, quite simply, not well equipped enough to deal with the clearing process. The phone lines are constantly busy which creates an incredible stressful and worried environment for those going through clearing.

Having spent over two hours attempting to contact Portsmouth University repeatedly, I eventually was put through with all the places taken even though my grades far surpassed even that of the average applicant. To grant tips? Avoid at any cost. Although it's worth the university place, bear in mind that you may not even get a chance to talk to a real person before the place is gone. First Year Law Student | University Of Surrey
This was one of the most stressful experiences of my life. The Ucas website crashed, all phone lines were jammed and universities did not always give you an instant answer. First Year Psychology Student | University Of Chichester
After not obtaining a place at my chosen university due to my maths grade I had to go through clearing which was a much more stressful situation than I thought it was going to be. There were few or no choices for reasonable universities, with most only requiring a passing grade (although I did not get the needed grade for maths my overall grade was well above the passing grade).

I considered only applying to two universities, Surrey as it required more than the passing grade, and another because it had a civil engineering and architecture course which interested me even though it wasn’t a particularly good university. My first attempt at calling Surrey they said there were no longer any places available. After a day or so, outraged that I was left with almost no options and received a more than reasonable grade for the IB (39 points), I called up Surrey again and specified my grades, I got put through to the head of the department who offered me a place. Second Year Civil Engineering Student | University Of Surrey

Others found it really straightforward

For some, Clearing was a breeze.

[Clearing was] very easy. Just bought a newspaper on results day that had listings of remaining places in university courses, phoned three [universities] and the third had a positive response. First Year Computer Science Student | Cardiff University
Clearing was easier than it is made out to be. Checked up vacancies online at about midnight when the website came up, phoned up the university directly at half eight in the morning and was immediately offered a place. Went down to provide details of my qualifications - an hour or so later and it was all finalised. Third Year History Student | University Of Lincoln
The process was very easy, I was informed that whilst I had not gotten onto my chosen course there was a similar alternative available. I was directed to the page in the prospectus where I could find information to make my decision. I was very lucky as I have enjoyed my replacement course but I know others who were not so lucky so the process should not be a rushed one and time should be taken to make the correct decision. Fifth Year Systems Engineering | Loughborough University

Changing your mind, or your first choice university not living up to expectations can all lead to navigating the Clearing landscape.

I got my place through Extras rather than clearing, but for all intents and purposes they are the same thing. I had to apply for universities one by one after being rejected by my original choices. While a simple process, it was NOT made clear that only one application could be made at a time.

As a result, my desired application to one uni was cleared when I added Bolton, where I was offered a place. This left me with the dilemma of rejecting Bolton and reapplying to a place I preferred and hoping I was accepted, at the risk of getting rejected and losing both places. First Year Biology Student | University Of Bolton

Often, people think clearing is JUST for those who didn't get their grades, but it isn't. I made my firm choice, but after I visited the uni, I realised it really wasn't for me.

Since I was accepted by my first choice, I had to apply to Lincoln via Clearing, as this was the only way. It was very stressful, as normally you are just waiting for one university to 'release' your application so you can give it to a different one. Sometimes it prevents you from going anywhere as you are always waiting for calls or emails because the process has to be done by a certain date.

Phone lines are always busy and sometimes staff aren’t the nicest. One even made me cry! But it just takes patience, and remember the final goal! First Year Social Studies Student | University Of Lincoln

They were extremely helpful and guided me through the clearing process and gave me advice on how I should proceed. First Year Biological Sciences Student | University Of Southampton
I was left with my insurance which I later decided I didn't want. I then visited Essex University on an open day and loved the atmosphere. I got in contact with the Economics department before turning down the insurance offer I had via Ucas, and then only when they agreed via email to take me via Clearing, did I reject the insurance offer. Fourth Year Economics Student | University Of Essex
I applied through Clearing because I hadn't found the course when applying originally. I applied and within an hour had a phone interview with one of the staff from my department and was made an offer within a matter of hours.

It was stress-free, easy to do and advice was offered throughout. I was very happy and I'd just say make sure you research your Clearing options before the day so that you don't panic and made an ill-informed decision when you get your results. Fourth Year English Literature Student | University Of Kent

It’s more complicated if you didn’t do A-levels

One major advantage is that IB students get their results from early July, and BTEC results are released from about mid-July, which means that they get a head start on clearing.
Doing the IB instead of A-Levels meant that there was a lot more time to arrange things and sort myself out but it also meant that unis were a bit more confused and I didn't get released from my offers until very late. Second Year Human And Social Geography Student | University Of Leicester
Gained place through pre-clearing as I did the IB. My two unis chosen as firm and insurance didn't understand it and were asking for over 500 Ucas points when they were only asking for three As at A-Level so 360 Ucas points. I got 487 and they said it wasn't good enough.

Leicester actually understands the IB system and understood how good my grades were. They treated you like a person and not a number. First Year English Law Student and University Of Leicester

On the other hand…

The head start could pay off.

I applied to four universities for Law and received four offers. I later decided to study Physics instead and went through clearing for Salford. It wasn't stressful for me because I did the international baccalaureate and so could go through Clearing months before the A level students. First Year Physics Student | University Of Salford

It’s not always a bad thing in the long run

In fact, your Clearing place might end up suiting you better than your initial choices!

I wouldn't worry, in hindsight I know it's a scary thing but it is not the end of the world and I have met loads of people through Clearing and I have immensely enjoyed my first year. First Year Politics Students | Swansea University
If you don't get the grades for your first choice, it is important not to panic. Also, don't rush to get on just any course, it has to be the right one for you. I had thought about my course previously but wasn't sure if it would suit me.

However, when I saw it in the list of clearing courses I decided to phone the course leader. Everyone I spoke to was very helpful and understanding, and when I did get an offer I was told I could make the decision to accept or decline it after going to an open day for Clearing students.

I found that my clearing course suited me even better than my original firm choice, and accepted. I ended up being glad that I went into Clearing! First Year Drama Student | University Of Glamorgan

It was horrible. Having to call up people on the phone and beg to be let on to their course is not an experience I want to relive. You have to reassess your whole life when you don't get your university offer. If you have to go through clearing, then call whoever seems like they're offering a good course. I called up RHUL [Royal Holloway, University of London] to do Ancient History and the person on the other end of the phone sold me on Classics instead; you could end up being exactly where you want to be.

If I hadn't gone through Clearing, then I wouldn't be at RHUL, and subsequently wouldn't be on a year abroad in Australia! It may seem like the worst possible thing at the time, but hopefully it'll all work out. Second Year Classical Studies Student | Royal Holloway University

It gives you a second chance

Clearing might just be the second chance saloon that you really need.

Since it was already really late for admission, I was given full support by the university to make my higher education possible. I needed a chance to prove myself and Abertay gave me that chance. Third Year Medical Technology | University Of Abertay Dundee

Clearing was a great opportunity for me to review my choices and successfully gain a place at a university near home and suited for my requirements. Second Year Social Studies Student | University Of Sunderland

You may not have the grades

Being a few UCAS points short shouldn’t put you off trying.

Don't be afraid to ring up if you don't meet the grade requirements. I was allowed on course despite now having enough points. First Year Chemical Engineering Student | University Of Westminster 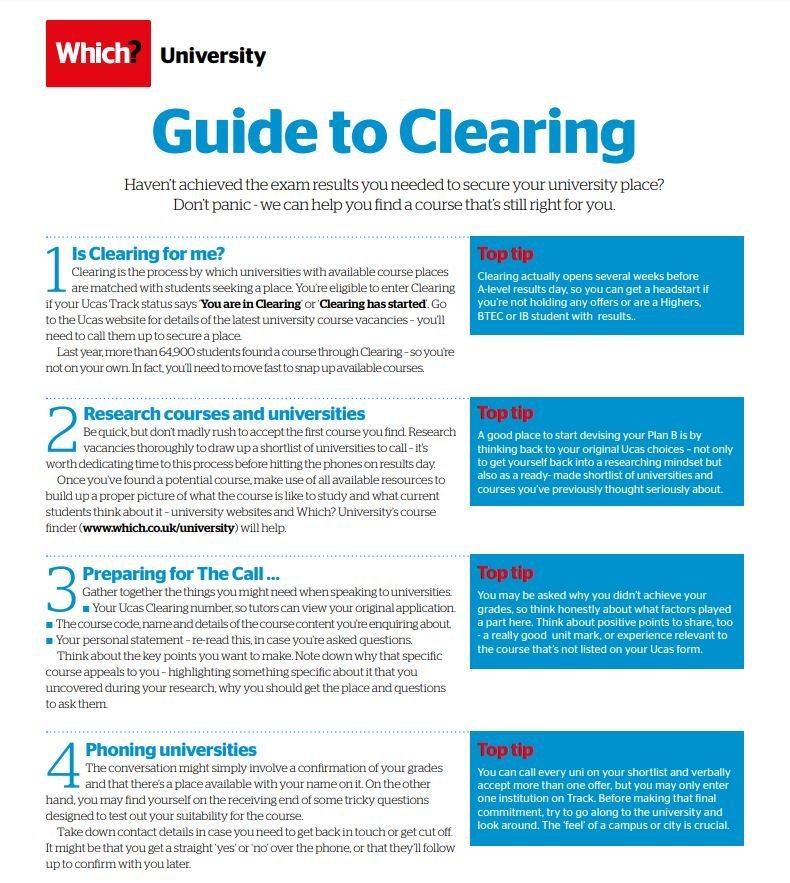